GOD’S ECONOMY.  Continuing from the last post, we are now comparing and contrasting two different “economies” broadly understood. For many of us, simply hearing the phrase “God’s economy” might strike us as odd. When we hear the word “economy,” we think of such things as money, the Federal Reserve, or GDP. That’s simply the way the word economy is typically used in our day.

The phrase “God’s economy,” however, harkens back to a broader meaning of economy. The Greek word from which we get the word economy is oikos. It’s the same root from which we get words like ecology and eco-system.(It’s worth considering how often our society pits concerns about “economy” against those of “ecology,” but we should remember they have the same root.)The Greek word oikos means house, household or habitation. And the other part of this compound word economy comes from the Greek word nomos, which has to do with law or ordering. So at its root, the word economy has to do with ordering the household.

The question at the heart of an economy, therefore, is about how any particular “household” should be ordered, whether that be at the micro or macro level. All of our own households are ordered in ways that seek to insure that people in that household have what they need. There are, of course, many different ways of doing that. Likewise, a neighborhood, a church, a city, and a nation-state also have their own kinds of economies, their particular ways of “ordering the household.”And of course in our day we also hear much talk about the global economy.

To begin examining this important question, we will first remind ourselves of how our “normal” everyday economies function, and then we will compare that to what scripture and the Christian tradition suggest about God’s economy.  In most cases, what appear on both lists are things we have heard most of our lives; what is most interesting is comparing the two lists, especially since most of us find ourselves operating (or aspiring to operate) in both economies. 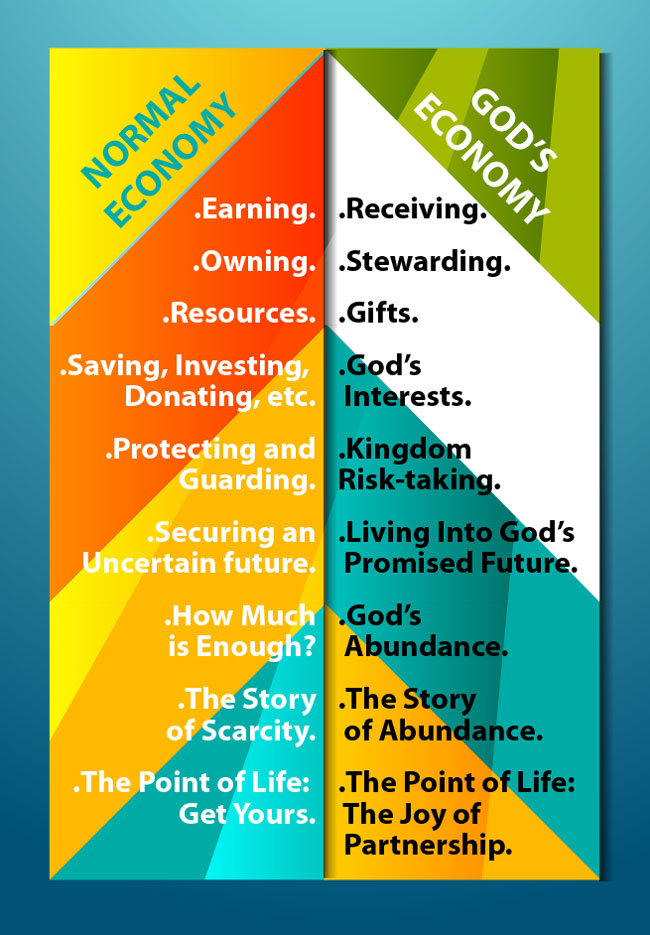 We begin with three things that are inseparably linked in normal everyday economies. They are so commonplace we hardly need to list them: earning, owning, and resources.

As with our “normal” economy, we begin our exploration of God’s economy with a basic triad: receiving, stewarding, gifts.

In the next posts, we will explore how we can live as a people more fully into God’s economy, and in so doing, live more fully into our full humanity, bearing witness to God’s desires for all of creation.

Questions for discussion and reflection

The Rev. Inagrace Dietterich, Ph.D. is the Director of Theological Research at the Center for Parish Development.