We now turn to comparing and contrasting two different “economies” (broadly understood). One economy, which we might call our

regular, everyday economy, is grounded in such fundamental practices as earning, owning, securing, and protecting. The other, which we might call God’s economy, or the economy of the open hand, is grounded in very different practices such as receiving, stewarding, risking and being vulnerable. Is it possible for the people of God to inhabit both economies? What might it look like for congregations to live more and more into God’s economy?

Last time we devoted ourselves to trying to sketch out very quickly some of the deep assumptions spoken and unspoken that the dominant culture delivers to most of us about work. (A Tale of Two Ends) We named such things as viewing work as a necessary evil, that work is primarily focused on pay or compensation, and that we are often, as a result, encouraged to live for the weekend. We are also taught that hard work leads to success. We devoted considerable time to reflecting on how our culture encourages us to view work as one of our fundamental identity markers. What you do for pay largely defines you in the eyes of other people, if not in your own eyes. Such identities are likewise bound up with issues of social status and hierarchy. As a result, our own sense of self-worth is often inextricably linked to the work we do for pay. We also took some time to unpack the ways our culture encourages us to “instrumentalize” our work, regarding our work primarily as a means to some other (usually financial) end.

Because we are formed to think of work primarily in terms of it being a means to some other end, it’s difficult to think through what might count for good work beyond issues of remuneration. In other words, there’s little incentive in our current conversation about work to ask if certain work is worth doing as long as most people believe that what distinguishes any job as “good” is whether it pays well and has decent benefits. For many people, as long as something pays well and is legal, who cares about whether it is good work or not?

If Christians find some of these fundamental cultural assumptions about work worrisome, what might we suggest in their place?

Might Christians view work differently if the practice of work were grounded in a different story about the world and our place within it? What if we encouraged our fellow Christians and their congregations to see their work within the larger story of God’s mission in the world?

A Missional Perspective about What God is Doing in the World. 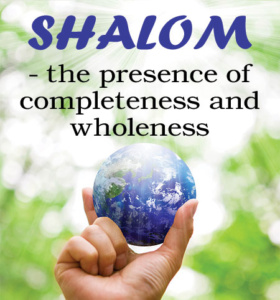 Christians tell a story that God is on a mission: God is reconciling all things in Christ. If you had to pick only one word from Scripture that summarizes God’s goal in that mission, that characterizes the shape of this in-breaking kingdom, you could do worse than picking the Hebrew word “shalom.” God is bringing a reign of shalom, a kingdom of shalom. Most English translations typically translate shalom as “peace,”but such a translation is inadequate for very particular cultural reasons. In Western cultures particularly, we define peace negatively. This is not to say that we think of peace negatively, but that we define it as the absence of something. So peace is defined as the absence of war or conflict. That’s a negative definition; we define peace by what it isn’t. But in Scripture shalom is actually a positive notion; it is not first of all the absence of something, but the presence of something. It is the presence of completeness and wholeness. That’s a very different thing. All of us have experienced situations where we weren’t in open conflict with others but there was no wholeness present. You can, for example, have a cease fire in your family and yet be nowhere near shalom. God’s desire, God’s mission, is to bring into existence a new social order, a new kingdom, a new reign of wholeness. That’s what God is doing in the world. The story of Scripture is that creation is in some sense fundamentally broken, that we as human beings are alienated from God, from each other, from ourselves, and from the rest of created order. God is on mission to bring all things back into wholeness and completeness.

Participating in the Kingdom or Reign of God. 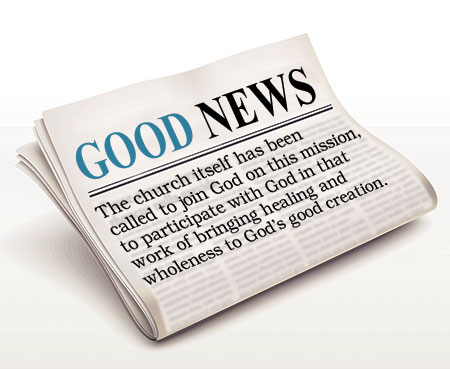 The news of God’s mission is astonishingly good news, and yet the astonishment doesn’t stop there, for the church itself has been called to join God on this mission, to participate with God in that work of bringing healing and wholeness to God’s good creation. Jesus calls this new social order that God is bringing into existence “the kingdom,” “the reign of God,” and Jesus announces that it is near. And so we pray that God’s kingdom would come more fully whenever God’s will is done on earth as it is in heaven, longing for that day when all things will finally be made whole. We are right to believe, therefore, that any time part of creation, part of humanity, part of all that God has made is moving toward greater wholeness that in some sense God’s kingdom is becoming more and more present in that moment. This is why Jesus could say things such as, “If by the finger of God I cast out demons, then the kingdom of God is in your midst.” In delivering them from demon possession and its brokenness, Jesus was delivering them toward greater wholeness.

To be clear: the reign of God is not fully here in the present, but it has broken into our world and the church has been called to be a sign, a foretaste, a servant of that reign. As such, Christians don’t themselves build the kingdom, that’s God’s work. We do, however, as N.T. Wright suggests, build for the kingdom. The Book of Revelation suggests that something of our work on earth will be gathered up by God and endure, finding a place in God’s renewed creation. How our work finally has a place we cannot say, for we are servants, not the master builder, but we labor trusting that the master builder can sanctify our work in ways that allow us to in some small way participate in God’s mission bringing healing, wholeness, and completeness to God’s creation.

Contributing to God’s work of Shalom.

Two final points before we press on to explore God’s economy and how it may differ from everyday economies. First, we must not allow our tendency to think of work as “gainful employment” or “remunerated labor” to lead us to ignore all the ways we might participate in God’s mission of shalom outside of the work we do for pay. There are countless kinds of work we engage in every day that aren’t for pay, and yet it can be good work contributing to God’s work of shalom. For example, most of us would like to think that being a parent, or a good friend, or a good neighbor might be some of the most important work that we do, contributing to some measure of healing and wholeness to those around us.

And second, let’s not underestimate the potential power of starting with a different set of working assumptions about work, a different framing story within which to understand our working lives.To begin by asking what God is about in the world and how have we been invited to participate in that mission is to shift the conversation to a very different place. This different starting point, these different sets of assumptions, foreground a very different set of concerns that would otherwise never find a place in our conversations about work. We have been given the privilege of partnering with God to bring a greater measure of healing and wholeness to a broken world across our entire working lives. What an exciting gift, what an exciting opportunity, we’ve been given.

Questions for discussion and reflection

The Rev. Inagrace Dietterich, Ph.D. is the Director of Theological Research at the Center for Parish Development.